In 1971, The City of Birmingham Polytechnic was formed by bringing together five colleges. The Birmingham College of Art was established in October 1843 by the Birmingham Society of Artists as the Birmingham Government School of Design.

In a supportive environment that encourages students to achieve excellence, the college offers an exciting, valuable and dynamic educational experience.

The BCUIC is part of the Global Navitas Group, a respected leader in higher education worldwide. With more than 120 colleges and campuses across the globe, Navitas has helped thousands of people change their lives through education. Having pioneered the university pathway sector, it has established partnerships with leading universities in Australia, New Zealand, the United States, Canada, the United Kingdom, Holland, the United Arab Emirates, Singapore, and Sri Lanka.

A dedicated Student Services team ensures the welfare of all BCUIC students. At the beginning of each semester, the team hosts Orientation and Enrolment, as well as providing disability support and learning support to students. Students can also make friends and settle in by participating in a range of social activities organized by the team every semester.

Several residence halls are available at the University, offering on-campus and inner-city living options with double beds, en-suite bathrooms, and even on-site gyms, making the University a great place to live.

Among UK universities, Birmingham City University is ranked #7 for employability, and 97% of graduates find employment or further study within six months of graduation.

Besides offering work placements in most degree courses, Graduate+ is an employability scheme that the University runs. Students can work towards Bronze, Silver, and Gold levels in this awards programme, which records extra-curricular activities. From day one at BCUIC, your child will be able to develop their professional profile as this scheme is embedded in every degree. A student’s career support is available to them for a period of up to three years after they graduate from Birmingham City University. 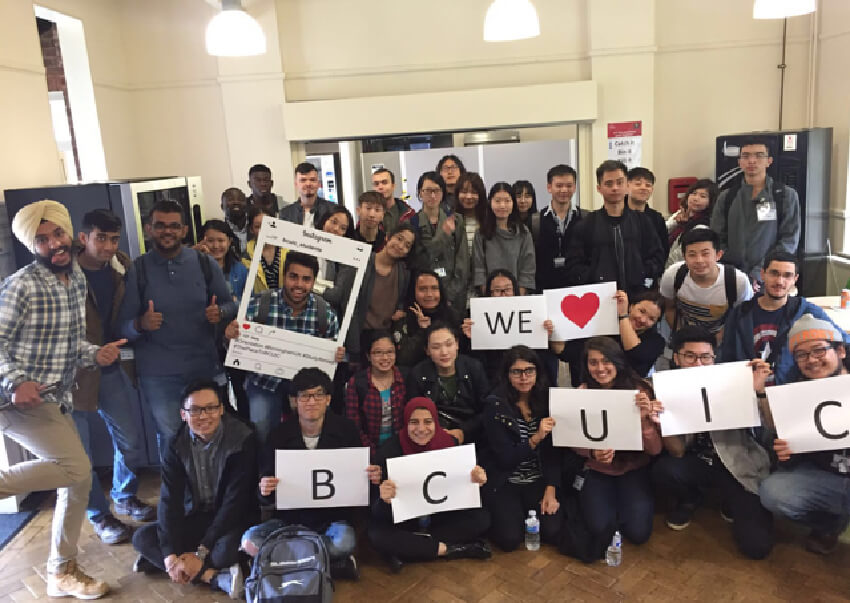 Interested in  our services or need advice? Then please get in touch and we’ll be glad to help.

At BCUIC, English is the language of instruction. You must demonstrate a satisfactory level of English proficiency to gain admission to an undergraduate or postgraduate program.

In the current academic year, Birmingham City University International College (BCUIC) charges a tuition fee of £13,500 for its Undergraduate programs, except for those courses (such as BA (Hons) Jewellery and Objects and BSc (Hons) Video Game Development). Per year, postgraduate courses cost £16,300.

In Birmingham City University International College (BCUIC) during each semester, Navitas Academic Merit Scholarships are awarded to the two students with the highest results across all programs .

The scholarship covers one academic semester (equivalent to up to five academic subjects) for the Navitas Diploma. As part of the program, recipients will be responsible for any additional costs, including travel, books, and equipment required. During the semester, Navitas member institute components of a program that articulates directly into a university degree program will be covered by the scholarship.